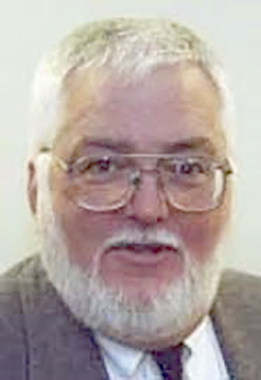 Camden - Robert Emmet Meara passed away from this Earth on February 8, 2020. If you can believe it, he was born before Pearl Harbor on December 22, 1940. He grew up in the "Huck Finn" neighborhood of West Roxbury, with a peat bog nearby that allowed his posse to set fire to the woods and then play on the fire engines. Arson was a neighborhood sport in West Roxbury. Until his last day, he was always tempted when he walked past a new pile of leaves.
Unfortunately, the MTA bus that took him to Roslindale High School continued all the way to downtown Boston where Meara spent most high school days playing pinball at the Mardi Gras Arcade with the sailors and hookers. Luckily, his more inspired friends forced him to take the SATs, which gained him admission to Northeastern University. In five years, he managed to avoid graduation by changing majors at will. He applied to Boston College in 1958 and was still waiting for that admissions letter when he died.
It seemed to be the thing to do, so Meara started a career in Boston's insurance trade, at the brand-new Prudential Center. Although he lived a single block away on Fairfield Street, Meara was routinely the last person at his desk. He was always the fastest health insurance underwriter on the floor because he rarely read the required medical reports.
To avoid a nervous breakdown after reading Kerouac, Meara hit the road and became a ski bum at Mount Snow in Vermont, where he managed to avoid the free ski lessons offered by the Swiss instructors. He was the best dancer in the valley, according to Meara. After that he fled to Miami and became an able-bodied seaman (some doubted it) aboard the Patria (Sea Cloud) - the largest private sailing vessel in the world. The Patria was tied up too long and when it finally sailed to Hong Kong for new decks, Meara was already headed to San Francisco in a repossessed Cadillac.
It was the Summer of Love in San Francisco and the staid (some doubted it) Meara had his mind reorganized while discovering Janis, Jimi and The Dead. He ignored an offer to try out for a photo job on some new magazine - Rolling Stone. He labored mightily for Mad Dog Trucking.
It was inevitable that Meara would end up in newspapers, so he begged for a job in Editor and Publisher and he ended up writing for the Attleboro Sun, back in Massachusetts. He got the job because he took a picture of Celtic great Tom "Satch" Sanders and it came out. He quickly graduated to the Gloucester Times when another applicant turned down the job at the last moment. Meara would have stayed at Cape Ann forever but a co-worker offered to fund a photo studio on Newbury Street to keep the co-worker's new wife happy and busy. That was great fun while it lasted but generated little money for luxuries like food and heating oil.
A marriage that was voted unanimously as "the worst East of the Mississippi" did create three wonderful, funny, sarcastic children, Griffin, Aran and Bridget. They were the light of his life until grandchildren Matthew and Meara (yes!) came along. You know how it is.
To avoid paying the onerous car registration fees in Massachusetts, he fled to Maine in 1971, intending to register his BMV, then return to the Boston area. Fate intervened when a Camden News reporter was murdered by her husband while Meara was lounging in Camden. Thank God, Bangor Daily News bureau chief Ted Sylvester hired Meara for minimum wage, $3 a picture and mileage. Meara drove a lot of miles and took numerous rolls of photos to make a decent wage. He was also the correspondent for the Boston Globe for years. Twice the Sunday Globe arrived on his parents' doorstep with a Meara front-page story and photo. If they were impressed, they kept it to themselves.
Meara worked for the BDN for three decades before being "downsized" in 2001. His houses in Martinsville and Camden were always the party houses, for some reason. His three-bedroom mansion, Cobb Manor, housed a delightful parade of ne'er do wells, poets, misfits and newly divorced parties of both sexes. Many observers said he "should have written a book."
During this period the reporters from the BDN, Portland Press Herald, Courier Gazette, Camden Herald and radio station WRKD celebrated an amazing camaraderie from breakfast to deadline. There was bitter competition, at least until press time, when the laughs started.
At Knox County Superior Court, he met the fabulous Blue Eyes (Susan Guillette) who put up with him for 37 years, much to the amazement of his jealous friends. She was the love of his life. He always said he just wanted one more year with Blue Eyes. Now he really wishes he had that one more year.
Service arrangements are incomplete and will be announced at a later date. They will include Otis Redding music.
Memories and condolences may be shared with the family at directcremationofmaine.com.
Published on February 11, 2020
To send flowers to the family of Robert Emmet Meara, please visit Tribute Store.

Send flowers
in memory of Robert

Cheryl sawtelle
Enjoyed your pieces in BDN. Kept me in stitches. Hope you brought a flashlight with you. Rest in peace, God bless
Ted Cohen
Don't forget Nancy. 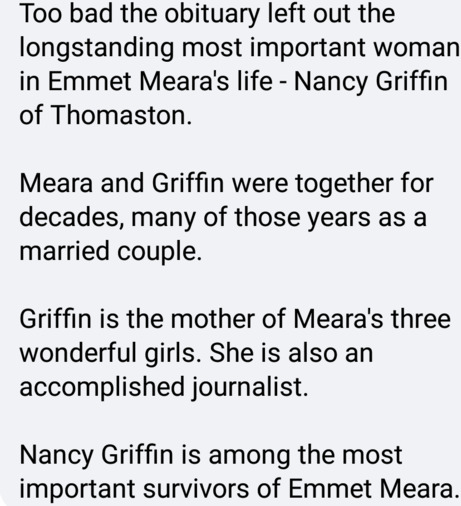 Helen York
Playing a lot of Otis Redding...
John Purcell
Emmet's passing marks a great loss for so many people. I have lost a decades-long friend, one who appreciated my sense of humor and easily made me laugh at myself. He was the good-natured target of my best pranks, whether in person or long distance, and I will always cherish the memories of his many yearly visits while on his way to Florida. My true condolences to Susan, his daughters, and his grandchildren. God speed, Bold Emmet, thanks for adding so much to my life!
RICHARD H ALLEY
Always enjoyed his outlook on “news”.
He never failed, though his obit claims he has passed.
Condolences to his family, friends and followers...
View all