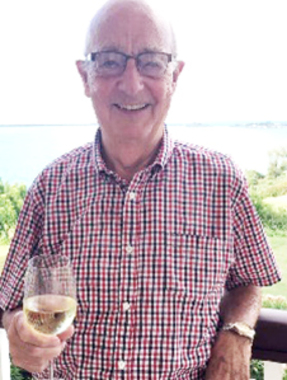 Topsham and Castine - Michael Ian Donald Morrison, 89, died peacefully at home with his family by his side on August 4, 2019. In the five weeks since his diagnosis with inoperable brain cancer, he met the rapidly changing challenges of the disease with courage, grace, humor and dignity, right to the end. His children continued to learn from, and be inspired by, their father as they cared for him in his home until his death.
Michael was born in Floriana, Malta on December 22, 1929, the son of of Lieutenant-Commander (later Captain) Donald Carter Morrison, Royal Navy and Mabel Margaret (nee Campbell) Morrison. He was educated in England and Canada, where he and his sister were evacuated during the Second World War, returning to England in 1945 to complete his education. Upon graduation he joined the British Army. He trained with the Argyll & Sutherland Highlanders, was commissioned into the Somerset Light Infantry and later transferred to the Parachute Regiment, where he rose to the rank of Captain. An avid distance runner, he also played rugby for many years in school, with the London Scottish Rugby Club, and finally with the New York Rugby Club. He then refereed up and down the East coast and into Canada for a further 15 years.
He worked for three years in Nigeria with the British West Africa Corporation, where he was the station manager in Kano. Returning to England he was an underwriter in the Lloyd's, London market. He married his first wife, Sarah Mary Anne (nee Drake-Lee), in September 1958. Tragically, she was killed in a car crash forty-two days after their marriage. He later emigrated to New York City where he married Eileen Betty (nee Park) on July 15th, 1963, his beloved wife of 52 years. With less than $5,000 to their names, they both quit their jobs and took an extended six month honeymoon driving 18,000 miles around the United States in a used VW bus, visiting 43 states, British Columbia and Mexico, for most of the trip sleeping in a tent. On returning to New York in June 1964 Michael joined the forerunner of American International Group, Inc. (AIG) where he spent the next 33 years, becoming president and later vice-chairman of American Home Assurance Company, AIG's principle domestic property/casualty insurance subsidiary. He was also senior vice-president of AIG and served on the board of CV Starr. During this time he and his family lived in Summit, New Jersey.
In 1994, about to retire, he was asked instead to go to Shanghai as General Manager of property/casualty operations, AIG being the first insurance company to be allowed back into China by the communist government. Finally retiring in 1997 he and Eileen settled in Castine, Maine where they had bought "Widow Stover's" 1796 house some ten years earlier. In 2001 he was called out of retirement to become President and CEO of a newly formed insurance company in Hamilton, Bermuda with a total staff of three. Allied World Assurance Company prospered and now has a staff of over seven hundred, with additional offices in many cities in the US as well as in London, Dublin, Hong Kong, Singapore, Toronto, Zug, Switzerland and other cities around the world. Allied World was listed on the New York Stock Exchange shortly after he retired as Chairman in 2004, though he remained on the board until the end of 2008.
In retirement he was active in Castine as a driver and board member of the Bagaduce Ambulance Corps for many years, treasurer of the Castine Historical Society, finance committee member of the Castine Scientific Society, a member of the Castine town budget committee, a tutor for many years with Literacy Volunteers of Bangor, and a founding member of At Home Downeast. Upon moving to Topsham he volunteered two days a week at MCHPP (Mid Coast Hunger Prevention Program).
He was predeceased by his loving wife, Eileen, who had provided inspirational support in all his ventures and is survived by his pride and joy, what he described as his greatest accomplishment - his family -Penelope Anne Morrison Boettiger and her husband Keith, Heather Elizabeth Pentland, Andrew Charles Carter Morrison and his wife Gabriella, and seven grandchildren: Paiute and Terra Morrison, Lindsay, Anna and Owen Boettiger, and Ian and Charlie Pentland, as well as by his sister Virginia Marilyn McShane of Dorset, England.
A memorial service will be held at Trinity Episcopal Church in Castine on August 26 at 10:30am. In lieu of flowers, contributions may be made in Michael's memory to the Double B Equine Rescue, 997 West Mills Rd, Industry, ME 04938 or At Home Downeast, P.O.Box 1107, Blue Hill, ME 04614.
Arrangements by Jordan-Fernald, 113 Franklin St. Ellsworth Condolences may be expressed at www.jordanfernald.com
Published on August 6, 2019
To plant a tree in memory of Michael Ian Donald Morrison, please visit Tribute Store.

A place to share condolences and memories.
The guestbook expires on November 04, 2019.