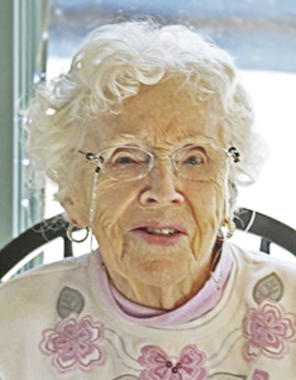 Southwest Harbor - Margaret Martel of Southwest Harbor passed away peacefully on Wednesday, January 30, 2019, at Sonogee Rehabilitation and Living Center in Bar Harbor. She was born Margaret Evelyn Webb in Boston, Massachusetts, on November 8, 1926. Margaret then grew up in Ipswich, Massachusetts, graduating from Ipswich High School in 1943.
As a teenager during World War II, Margaret served as a plane spotter, taking her turn in shifts on a high hill in Ipswich. She also worked on her future parents-in-law's farm as a volunteer in the Women's Land Army to help with the war effort from the homefront. She married her beloved Marine, John Martel, in December, 1944. Later, in the summer of 1945, she traveled from Massachusetts to California by train to support him while he completed his military obligation. Settling once again in Ipswich, she began raising three children and leading them on beach excursions and other adventures until the family's move to Southwest Harbor, Maine, in 1960. There she worked at Carroll's Drug Store for several years, and served as town clerk during the late 1960's. She later worked as bookkeeper for Beal's Lobster Pier and Ken Hutchins' construction business.
Margaret had an astounding variety of interests, with a deep passion for dancing, music, and watercolor painting. Always ready for a sojourn, she would grab her coat and head for the door whenever opportunity called, sometimes even before knowing where she was going. She was a member of the Southwest Harbor Congregational Church, as well as the American Legion Auxiliary. During the l 960's and '70's, she and John square danced with the Acadia Belles and Buoys club. They once joined a square dance train that journeyed from Halifax, Nova Scotia, to Vancouver, British Columbia, dancing at stops all across Canada. Margaret was the heart of her home as she raised her three children and encouraged them to be their best. Always ready to see the funny side of life, she passed on her sense of humor to succeeding generations through stories and laughter.
Margaret was predeceased by her mother, Mildred Webb, her parents-in-law, Wilfred and Hester Martel, and her husband, W. John Martel, Jr. She is survived by her daughters, Ellen Corkery of Southwest Harbor, and Merle Martel of Clearwater, Florida; son, Jack Martel and his wife Mary Ellen; grandsons, Richard Whitaker and his wife Christina of Marblehead, Massachusetts, and Matthew Whitaker and his wife Polly of Seffner, Florida; granddaughter Jennifer Martel LaHaye and her husband Matthew of Southwest Harbor; her great grandsons, Thomas Whitaker and his wife Tiffany of Old Town, and Nicholas, Graham, and Sebastian Whitaker of Marblehead, Massachusetts; step-great-granddaughter Carmen LaHaye of Southwest Harbor; and several treasured cousins and friends.
Margaret's family wishes to thank the staff of the Sonogee Rehabilitation and Living Center--particularly the caregivers of the East of Eden wing--the professionals and volunteers with Northern Light Hospice, and the Mount Desert Nursing Association for their loving and patient care in her final months.
Memorial services will be held, 1:00PM Tuesday, February 12, 2019 at the Southwest Harbor Congregational Church. Spring interment will be at 11 a.m. June 22, Mt. Height Cemetery, Southwest Harbor.
Margaret loved flowers; however, those who prefer to make a donation in her name might wish to consider the Deacons Fund of the Southwest Harbor Congregational Church, P. 0. Box 727, Southwest Harbor, ME 04679.
Arrangements by Jordan-Fernald, 1139 Main St., Mt. Desert. Condolences may be expressed at www.jordanfernald.com.
Published on June 15, 2019
To plant a tree in memory of Margaret Evelyn Webb Martel, please visit Tribute Store.

Plant a tree in memory
of Margaret

A place to share condolences and memories.
The guestbook expires on May 02, 2019.