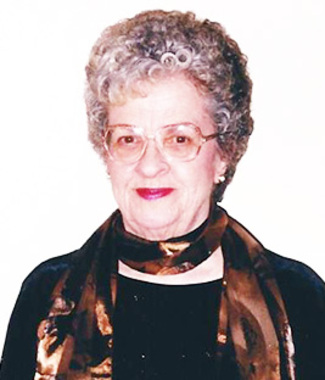 Bucksport - Margaret Bridges Hamilton Cook, 93, passed away on January 8, 2020. She was born on September 21, 1926 in Penobscot, the eldest of five children to Lawrence and Regina (Hutchins) Bridges.
Margaret graduated valedictorian from Clark High School in Penobscot in 1944. After graduation she moved to Springfield Massachusetts where she went to work for Western Mass Electric. Margaret met and married Richard Hamilton in 1946, they moved back to Maine where she worked as a secretary at the University of Maine in Orono while Richard was a student there.
After graduation they moved to Albany, NY where Margaret worked for the New York State Teachers Association. Later they moved to Connecticut and had their two children, Gail and Mark. The family returned to Maine in 1960 setteling in Stockton Springs and later in Houlton where she and Richard divorced. She married her present husband Russell Cook in 1971 and after living one year in Lincoln, moved to Bucksport where they raised three children.
She was spiritually connected to the ocean; from the time she was a child jumping from iceberg to iceberg in the Northern Bay to her many camping trips up and down the Eastern Seaboard. Her most treasured moments were spent with her grandchildren and great-grandchildren.
Margaret is survived by her husband of 48 years, Russell; daughter Gail Robshaw of Orland; son Mark and wife Bonnie Hamilton of Longwood, Florida; stepson Tracy Cook and Sheree Davis Cook of Union; grandchildren Samantha Robshaw, Sara Robshaw, Ciera and husband Sy Yost, Alexus Hamilton, Joshua and wife Tara Sibley and Jennifer and husband Sergio Sibley; great-grandchildren, Delaney, Madelyn, Isabella, Stella, Wyatt, Olivia, Gabriel, Colby and Emma; two very special sisters-in-law Patricia Bridges and Connie Bridges.
She was predeceased by her parents; her stepfather Edward Perkins; brothers William and Kenneth Bridges, sisters Beverly Reynolds and Rebecca Bridges.
A graveside service will be held later in the spring. Arrangements are under the care of Mitchell-Tweedie Funeral Home and Cremation Services Bucksport.
(mitchelltweedie-young.com)
Published on January 14, 2020
To send flowers to the family of Margaret Bridges Hamilton Cook, please visit Tribute Store.

Send flowers
in memory of Margaret

A place to share condolences and memories.
The guestbook expires on April 13, 2020.