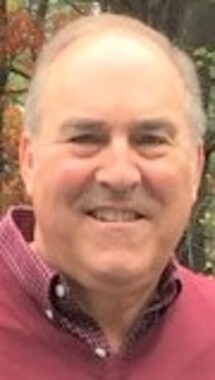 Back to Keith's story

Brunswick - Keith Drew, 63, of Brunswick, Maine passed away peacefully from complications of Acute Myeloid Leukemia (AML) while surrounded by his loving family on Feb. 6, 2020 at Brigham & Women's Hospital in Boston. Keith fought his illness for two years with courage and grit, even in the face of extreme adversity. From the time of his diagnosis through his final breath, he truly lived by the motto adopted by the head coach of his beloved New England Patriots of "No Days Off".
Keith was born in Bangor, Maine, on August 23, 1956. He graduated from Brewer High School in 1975 where he starred on the football field. Upon graduation, he went on to further his education at Eastern Maine Vocational Technical Institute, earning his Associates degree in Culinary Arts. From there, Keith moved north to Caribou and began to build his own insurance agency working for Prudential Insurance Company. He stayed with Prudential for over 20 years before making the move to Allstate Insurance Company in 2003, becoming an Exclusive Agent with the company and starting Keith Drew Enterprises. Over the course of his 17 year career with Allstate he successfully owned offices in Presque Isle, Rockland, and Camden.
Keith loved sports, particularly the New England Patriots. To sit with him on game day was like sitting with a member of the organization. His knowledge, analysis, and passion for his team was something to behold and unrivaled by anyone. He passionately followed the Red Sox, Celtics, and Bruins as well. Keith also loved attending local sporting events and diligently followed the high school sports scene in Maine, which is how he eventually met his wife Carol. He enthusiastically supported his daughter throughout her high school and college soccer career and he was undoubtedly her biggest fan. He always beamed with pride when talking about her athletic accomplishments. He cheered on his step-daughter Ashley throughout all of her athletic endeavors, from the soccer field to the tennis courts. Over the past several winters he could be found in the stands proudly sporting the Purple & Gold of Cheverus High School in support of his step-son Ryan who currently coaches the boys basketball team. Most recently, he enjoyed being able to attend his grandkids sporting events as well.
Over the past eleven years, Keith enjoyed his new home in the beautiful midcoast region of Maine. It offered him everything in life that he appreciated the most. Together with Carol, they enjoyed biking, walking the beach, and exploring the many tiny islands along the coast. Whether it was Boothbay Harbor, Camden-Rockport, or Bar Harbor Keith was always at peace near the water. He was most fond of spending time on warm summer days with his grandkids at Popham Beach in Phippsburg. During nine of those eleven years Keith became known as Papa or "Pup Pup", as he was lovingly called, to his five grandchildren. Keith's grandchildren brought an incredible amount of love and joy to his life.
Keith is survived by his loving wife and valiant and faithful caregiver, Carol Soucie-Drew, of Brunswick; his daughter Leah Harvey and her husband Craig Harvey of Bowdoin; his son Adam of Augusta; his step-son Ryan Soucie and wife Lonnie Soucie of Brunswick; his step-daughter Ashley Tucci and husband Dave Tucci of Cumberland; his five grandchildren who were the light of his life Lucia, Landon, Riley, Caden, and Kyler; his father, Perry Drew of Brewer, Maine; his brother Tom Drew and his wife Joy of Scarborough, Maine; his sister Calla Burgess and her husband David of Kittery, Maine; his nephew Justin Drew and his wife Katie of Washington, D.C.; his cousins, Dale and Dianne; his father and mother-in-law, Ralph and Gwendolyn Ferguson of Caribou; his sister-in-laws, Connie Collins and her husband Thomas of South Grafton, Mass. and Kim Taggett and her husband Glenn of Caribou, Maine; a niece and nephews and many special friends and colleagues.
He is predeceased by his beloved mother, Pauline Drew, and his niece, Ashley Drew, who undoubtedly greeted him with open arms at the Gates of Heaven.
There will be a Celebration of Life at the Brunswick United Methodist Church on Friday February 28, 2020 at 11:00 am. In lieu of flowers, gifts may be made to Dana-Farber Cancer Institute in memory of Keith Drew to support cancer research and patient care at Dana-Farber Cancer Institute, P.O. Box 849168, Boston, MA 02284 or via jimmyfund.org/gift.
Arrangements are by Stetson's Funeral Home 12 Federal St. Brunswick where memorial condolences may be expressed at
stetsonsfuneralhome.com.
Published on February 14, 2020
To send flowers to the family of Keith Drew, please visit Tribute Store.

Send flowers
in memory of Keith