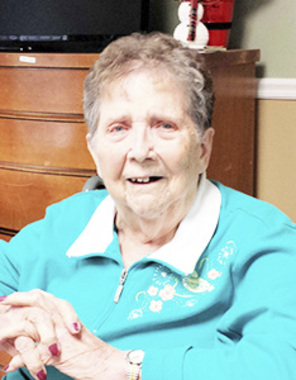 Back to Helen's story

Princeton - Helen S. Ward, 92, passed away Saturday, March 23, 2019, at Eastport Memorial Nursing Home. Helen was born in Baileyville on October 24, 1926, daughter of Edward and Lida (Smith) Southard.
After graduating from St. Croix High School in Baileyville, Class of 1944, Helen moved to Washington DC where she worked for the Ration Board during WWII. She eventually returned home where she taught school in Alexander for a year and in 1946 married her love, Paul Ward. Later, Helen became a cook for Princeton Elementary School for several years.
Helen enjoyed cooking and baking, especially wedding cakes, and was known for her "famous" Mocha Cakes. She also enjoyed knitting, supplying many locals with slippers and dishcloths. Helen was a member of the Princeton Congregational Church where she was active with the Sunshine Circle, and in earlier years was a member of the Grange.
In addition to her parents, Helen was predeceased by her beloved husband Paul Ward Sr.; a son Paul Ward Jr.; grandson Clint Brown; four sisters, Evelyn Libby, Deanie Hurd, Lida Cooper, and Ollie McConaghy; and two brothers, Edward Southard Jr. and Donald Southard. Surviving are her two children, Bert Ward and wife Anna of Princeton, and Gayle Barschdorf and husband Walter of Pownal; six grandchildren, Billie Jo Jack and husband Paul of Nakawic, NB, Kadance Ward of Princeton, Jason Barschdorf and wife Danielle of Yarmouth, Jennifer Barschdorf and husband Brian Purdy of Buxton, Jill Ray and husband Seoras of Gorham, and Jayme Barschdorf of Pownal; eight great-grandchildren, Brianna, Eliza, Maia, Quinn, Paul, Madalynn, Eoighan and Fiona; one sister, Luella Perkins of MA; sister-in-law Edna Southard of Calais; dear friend Penny Braley of Princeton; and numerous nieces and nephews.
Visiting hours will be held 12 noon until the hour of service, 1 p.m. Wednesday, March 27, 2019, at Mays Funeral Home, 26 Church St., Calais. Burial will be held in the spring at Meddybemps Cemetery. Condolences and memories may be shared at
www.MaysFuneralHome.com
Published on March 24, 2019
To plant a tree in memory of Helen S. Ward, please visit Tribute Store.

Plant a tree in memory
of Helen

A place to share condolences and memories.
The guestbook expires on June 22, 2019.