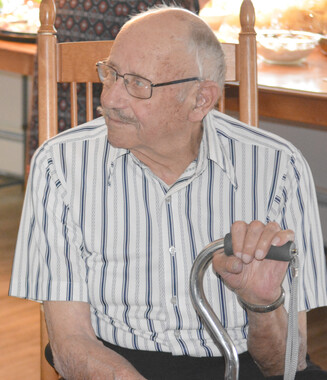 Back to Harvard's story

CARIBOU - Harvard Holmquist passed away on February 7, 2020 after a period of declining health. He was born in Caribou, Maine on May 26, 1929, the oldest child of Radcliffe Holmquist and Verna Hackett Holmquist. Harvard was raised in Westmanland and attended the Westmanland School, a one room schoolhouse, through the eighth grade. He then attended Caribou High School, graduating in 1947. As a child, he worked on the family farm, was active in 4H, and enjoyed activities such as cross-country skiing.

In 1950, he enlisted in the US Navy and served as a radioman aboard the USS Blackwood. After his discharge, he returned to Westmanland where he began farming. In 1965, he married Bernice Cyr, a widow with four children, and moved to Caribou. After Bernice's untimely death in 1968, he married Madeleine Corroppoli, together they operated Harvard's, a convenience store located on the New Sweden Road in Caribou for many years.

Harvard was known to many folks around Aroostook County. He was lifetime member of The American Legion in both the Stockholm and Caribou Posts, and served as County Commander. He was an avid snowmobiler, taking part in the activity from the time it first gained popularity in the 1960s. He enjoyed many snowmobile adventures throughout the County with his friends and was a past member of the Nordic Lakers snowmobile club.

Upon retiring, he and Madeleine moved to Cross Lake. They enjoyed lake Life especially fishing on Square Lake, spent several summers in Alaska and were frequent visitors of Stan's at Madawaska Lake. After Madeleine's death in 2004, he continued to live at Cross Lake until he moved to Caribou Gardens in 2014.

He is survived by his step children David Cyr and wife Debbie of Westmanland, Charles Cyr and wife Linda of Caribou, and Francis Cyr and wife Carol of Caribou, his brother Wayne and wife Anita of Raymond, brother Judson and wife Leona of Naples, Florida and Arundel, sisters Linda Sharp and husband Warren, Fern Counes and husband George all of Venice, Florida, and Clarice Rossignol of Gray, a sister in law, Verna Holmquist of Madawaska, eight grandchildren, eight great-grandchildren, and many cousins, nieces and nephews, and his brother in law and good friend David O. "Mich" Michaud. He is fondly remembered by Mark Poirier and a very special niece, Debbie Tardy, who cared for him while he was at Caribou Gardens, Harvard was predeceased by his parents, first wife Bernice, second wife Madeleine, step daughter Louise Cyr Jose, sister Gale Ketch, sister Janet Ketch and her husband Herbert, and brother John Holmquist.

The family wishes to thank the residents of Caribou Gardens who kept an eye out for him while he lived there, the staff at the Maine Veterans Home in Caribou for their care and support, and the wonderful health care providers of Cary Medical Center for the care and comfort they provided Harvard and his family during his last days.

Friends may visit with the family on Thursday, February 13, 2020 at the Mockler Funeral Home 24 Reservoir Street, Caribou from 10am until time of services. Funeral services will be held at 11am from the chapel of the funeral home with Rev. Ron Rosser officiating. Following the service, all are invited to a time of continued fellowship and refreshments at the American Legion Post 15, 67 Sweden Street, Caribou. Spring interment will be in the New Sweden Cemetery. www.mocklerfuneralhome.com
Published on February 9, 2020
To plant a tree in memory of Harvard Holmquist, please visit Tribute Store.

Plant a tree in memory
of Harvard

A place to share condolences and memories.
The guestbook expires on May 09, 2020.

Kristi Herron
My sincere prayers on passing of your loved one,a life well lived.My condolences to all the family.
Peggy Gendreau
Sad to see you go , enjoyed bringing a little something for you to eat from soups to sweets.. glad that my daughter and I got to see you at the veterans home last week.Rest in peace our friend.❤️❤️
David and Brenda Felch
So sad to hear that you are gone my friend we will miss you and our thoughts are with our family
View all