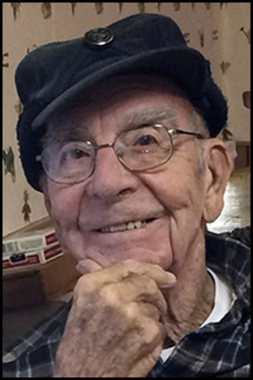 Back to Guy's story

East Machias - Guy Roberts Cox, of East Machias, passed on to his heavenly home on October 24, 2017. He was born in Wesley, ME, Feb. 25 1924, a son of Lindell and Josephine Roberts Cox of Northfield. He was a graduate of MMHS class of 1942 and enlisted in the US Air Force in Jan. of 1943. Trained as an aircraft mechanic in California and hydraulic specialist in Kansas City, KA, he served in WWII in Africa at Casablanca and at Accra B.G. Coast from Jan. 1944 until Nov. 1945. Guy worked for St. Regis Paper Co. from April 1947 until his retirement in 1985. He was predeceased by his parents, a sister, Esther, a brother Donald, his first wife of 52 yrs., Angeline Hayward Cox, and second wife of 10 yrs., Hazel Taylor Mallar. Guy is survived by a son, Paul Sr. and his wife Irene of Machiasport, a daughter, Linda and her husband, Mark McBrine of Bangor. 11 grandchildren; Andrea, Paul Jr., Jennifer, Christopher, Andrew, Stephen, Micah, Rebecca, Sarah, Rachel, and Leah. 7 great grandchildren; Derek, Scotty, Hannah, Zachary, Gavin, Jackie, and Alayna. A memorial service will be held at Machias Valley Baptist Church, Broadway, Machias on Sat. Oct. 28 at 1:00 p.m.
Published on October 27, 2017
To plant a tree in memory of Guy Roberts Cox, please visit Tribute Store.

Plant a tree in memory
of Guy

A place to share condolences and memories.
The guestbook expires on January 24, 2018.