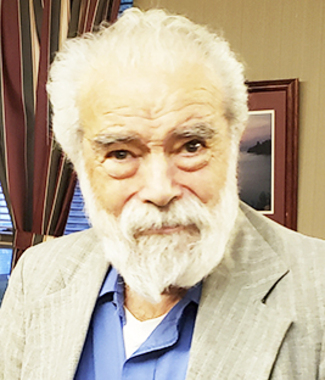 Bangor - Epiphanes Kevork Balian, beloved brother and uncle, died at the Maine Veterans' Home on November 16, 2019. 'Epi' was born in Beirut, Lebanon on December 5, 1937 to Bali and Veronica [nee Donabedian] Balian.
He was a Major in the United States Air Force during the Vietnam War. He was a graduate of the American University of Beirut, Boston University, and Loyola University, and was a licensed physician [MD] and attorney [JD]. He served the eastern Maine community as a prominent psychiatrist from his home office on Hogan Road in Bangor from 1972 to 2016. He was devoted to his family and his Armenian heritage, and anonymously donated much time and money to needy people.
He is survived by his sisters, Sion Hagopian, Pishon Schulz, Gihon Sears, Saronne Balian; and many nieces; nephews; cousins; and devoted friends.
He was laid to rest, with military honors, alongside his late brothers, Antibas and Theophile, at Masis Ararat Armenian Cemetery in Fresno, California on December 12, 2019.
Published on December 27, 2019
To plant a tree in memory of Epiphanes Kevork Balian, please visit Tribute Store.

Plant a tree in memory
of Epiphanes

A place to share condolences and memories.
The guestbook expires on March 26, 2020.

Jessie Gunther
We met professionally. He was always a pleasure to work with and was missed when he retired.
Bob, Sue, Ann & Brute
Epi was a special friend to all of us that knew him...his smile and mild mannered ways will be missed by all of us who spent time with him in the past few years.
robert balian
I am the youngest son of manasee balian, epi's uncle. I met epi once as a young little boy in 1962. He had great and devine presence about him. He was very intelligent and spiritual like his dad Bali. Epi has inspired me throughout my life with his powerful yet gentle spirit. God blessed you and your influence with many people here on earth and we WILL SEE EACH OTHER AGAIN IN HEAVEN!!
Gerald A. Metz, M.D.
Goodbye, old friend. You did a lot of good for many people.
Priscilla Spencer

I suffered depression for 13yrs I could not go out anywhere only a little ride on Sunday.could not be around anyone..I needed my Dr. he was not available..I was sent to Dr.Balian....in no time that man had me living again....RIP Dr..Balain