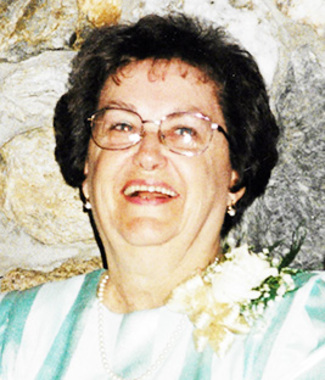 Back to Dora's story

Frenchville - Dora Franck, 92 passed away on Monday, January 13, 2020 at a Madawaska Nursing Home. She began her life on September 11, 1927 in Fort Kent, Maine, the daughter of Ligori and Elise 'Michaud' Robichaud.
Dora grew up in Fort Kent and then married the love of her life, Philip Franck. Together they lived in Frenchville and raised eight children, Louise Cyr of Henniker, NH; Gregory Franck of Madawaska, Maine; Mary Thibeault of Boca Raton, Florida; Ann Franck of Frenchville, Maine; Leah Chamberland of Terryville, Connecticut; Ruth Martin of Wolcott, Connecticut; Jean Violetteof Clinton, Maine; Lynne Franck of Coral Springs, Florida. She was Memere to twelve grandchildren and thirteen great grandchildren.
Dora was predeceased by her siblings, Rita Freemen, Patrick Robichaud and Philip Robichaud.
She is survived by three sisters, Louise Barresi of Kennebunk, Maine; Sr. Juanita Robichaud of Winthrop, Maine; Venette Motyl of Long Boat Key, Florida; and one brother, Leo Robichaud of Brunswick, Maine.
Dora worked as a bookkeeper for Johnston Oil; Northern Trading; and a Bank Teller for Key Bank. She was co-owner with her husband and bookkeeper for Valley Service and Tuffkote Rust Proofing.
Dora devoted her life to raising eight independent children. She had an extremely big heart and touched many people in her own special way. She was also an amazing cook and her most memorable were the Sunday lunches with Glen Miller while music played in the background, singing or dancing in the kitchen with Phil, while adding a spice or two. She was an avid baseball fan, go Atlanta Braves; and a Duke Blue Devils basketball fan. If there was any game on television, she had to watch. She also loved game shows and crossword puzzles. She had a competitive streak with playing cards and would rarely refuse an opportunity to play Charlemagne. She is now at peace with her one and only, Phil.
Family and friends may pay their respects on Saturday, January 18 at the St. Luce Catholic Church, Frenchville starting at 8:30 AM until time of service. A Mass of Christian burial will be celebrated at 10 AM. A time of fellowship will be held immediately afterward at the Frenchville Community Center. In lieu of flowers, memorial contributions may be made to the Ridgewood Estates Activity Department.
Condolences may be made to
michaudfuneralhomes.com
Published on January 14, 2020
To send flowers to the family of Dora Franck, please visit Tribute Store.

Send flowers
in memory of Dora

A place to share condolences and memories.
The guestbook expires on April 13, 2020.

Helene Pelletier
I'll miss her sense of humor. Whenever I had to check her blood sugar, she'd wait 5-6 seconds and then yell OUCH! And then she'd playfully kick me in the shin. And of course, I'd wait 5-6 seconds and scream OUCH!!! This was pretty much a routine with us. Rest easy, sweetheart!
Marcus Barresi
Aunt Dora was a character. I last visited her at the facility in Madawaska last June with my mother. She always had something funny to share . She raised a huge family and I always admired her work ethic and dedication to Uncle Phil and her children. It was sad to see her health taking its toll.. Rest in Peace
Allen Chamberland
My sympathies to the Franck and Robichaud families. She was a nice woman and former neighbor.
Lucy Misko

Sweetest Sunrise Bouquet was purchased for the family of Dora Franck by Lucy Misko.  Send flowers

Louise and Jay
We are so sorry for the loss of your mom. Our thoughts and prayers for the Franck family. She was a very comical lady. So sad. Thinking of you all .
Norman & Jackie Chamberland
My condolences to you Leah and your family and friends.
Stu
Rest in peace Memere Franck. I will always remember your competitive spirit, caring heart, and joyful laugh. Thank you for the wonderful memories. May God bless your soul.
Stu

Sweetest Sunrise Bouquet was purchased for the family of Dora Franck by Stu.  Send flowers