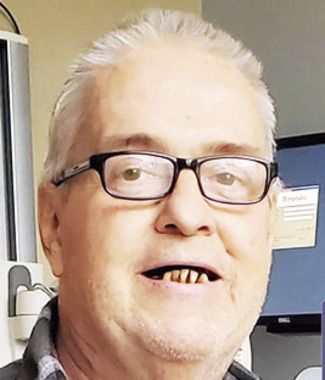 Washington & Indian Township - Donald J. Socobasin (Donnie Bix) passed away with his family at his side, on Sunday, November 10, 2019. Born March 18, 1958 to Marjorie White and Joseph Socobasin Sr., Donnie grew up in Washington and attended local schools. When he was a teenager, he moved to Indian Township where he worked and lived until going back to Washington in 2008.
Known as the life of the party, Donnie always knew how to have a good time and encouraged others to do so as well. Throughout his life, he attended over 250 concerts, and recently said that Stevie Ray Vaughan was his favorite of them all. Over the years he loved riding his Harley, covering many miles with his brother Joe until his passing in 1993, he continued riding until he was physically unable to do so.
Donnie had a love for pigs, which earned him his nickname, Donnie Bix, given to him by his father. He had a countless amount of pigs in his collection, and if you were lucky, he would even show his pig tail tattoo. Always joking and playing pranks, falling asleep with him around could have potentially cost you an eyebrow. He loved to greet everyone with his famous, "Waazzzaaap". He even would call you collect, saying it was "Elvis", just for laughs.
Donnie had great love for his family. He would never leave or hang up the phone without saying "I Love you". He was predeceased by his parents, his stepparents Richard Norton and Mary-Ellen Socobasin; his brothers Joseph and Jonathon Socobasin, and his niece, Bobbie Jo Denman.
Donnie is survived by his children, Richard Stevens of Indian Township, Faith Sanders of Westbrook, and Hope Dana of Indian Township; his siblings, Brad White of Brewer, Sandra Eggen of Washington, Wanda Tweedie, Robert Socobasin, Jeanette Socobasin, Lucas Socobasin, and step sister, Bridgid Neptune, all of Indian Township. Also surviving him are his grandchildren; Jackson, Jonah, Blake, Logan and Everly as well as too many nieces, nephews, great nieces and great nephews to list. He also leaves behind his best friends, Billy Bourgeois and Sterling Chapman, as well many other friends he made throughout his lifetime.
Visitation will begin at 2:00 pm, Thursday, November 14th at 62 US Route 1, Indian Township until 10:00 am, Saturday, November 16th. A Mass of Christian Burial will be celebrated, 11:00 am, Saturday, November 16th at St. Ann's Church, Peter Dana Point with Rev. Kevin J. Martin officiating.
A celebration of Life will also be held Saturday, November 30th at 3:00 pm at the Liberty Community Hall, 3 Serenity Lane in Liberty. Burial will be held at a later date at Indian Township Tribal Cemetery. Arrangements by Mays Funeral Home, Calais & Eastport.
Condolences and memories may be shared at
maysfuneralhome.com
Published on November 12, 2019
To plant a tree in memory of Donald J. Socobasin, please visit Tribute Store.

Plant a tree in memory
of Donald

A place to share condolences and memories.
The guestbook expires on February 10, 2020.