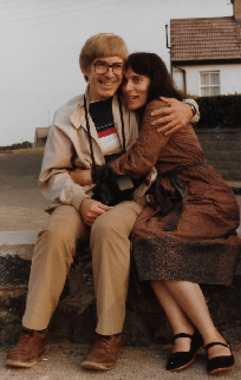 Marshfield - Donald Francis Douville, 87, of Marshfield, Maine, beloved husband, father, grandfather, and great-grandfather, died peacefully early on the morning of Sunday, February 9, at the home of his daughter Jennifer VanHorne in Waldoboro, Maine, as birds sang in the trees outside and a full moon shone through his window.
Don, born to Anna (Hayes) Douville and Rodolphe Gideon ("Tommy") Douville on May 15, 1932, in Goffstown, New Hampshire, lived for much of his youth with his Irish immigrant grandparents in a tenement building in Manchester, New Hampshire, and his warm and hard-working grandmother Nora (Dennehy) Hayes was his anchor. He was proud to be Irish, obtained a dual Irish citizenship later in his life, and enjoyed delightful trips with family there.
Don was a person of tremendous strength, determination and intellect, who rose from humble beginnings to attend Sacramento Junior College in Sacramento, California, on a football scholarship and ultimately to attain a bachelor's degree from the University of New Hampshire, a master's degree from Boston University, and what he called an "ABD," all but dissertation, in a Ph.D. program in psychology from the University of Illinois. He devoted his career to the well-being of children, both as a school psychologist and as a consultant to the Connecticut State Department of Education.
Don met the love of his life, Lillian Helena Fraser, of Hampstead, N.H., at a wedding in 1956, and they were married on June 15, 1957. In rapid succession, they had three daughters, Susanni, Rebecca and Jennifer, as they moved from New Hampshire to Minnesota to Illinois, back to New Hampshire, and then to Connecticut in 1966. They made their final and happiest move in 1990 to Marshfield, where they retired and enjoyed the friendship of good neighbors on "The Ridge."
Don was a family man who devotedly cared for his wife Lil, who was afflicted by rheumatoid arthritis, and provided endless love, support and guidance to his daughters, grandchildren and great-grandchild. He adored gatherings with family, whether in Marshfield for the holidays, Monmouth Theater, or the beach. He was a consummate host who was known for his signature pancakes and waffles.
Don was also a gifted writer of poetry, a voracious reader, an avid sports fan, a devoted runner, a lover of nature and travel, from family camping trips to adventures in Europe and Hawaii, an aficionado of live musical and theatrical performances, and a car/BMW enthusiast.
Don is survived by his wife of 62 years, Lil; his daughters and sons-in-law Susanni Douville, John R. Hull, Jr., Rebecca Albright, Jennifer VanHorne, and Eric Van Horne; his grandchildren Torie DeLisle and her husband August DeLisle, Mikolas Albright, Sebastian Albright and his girlfriend Reneé Workman, Erin Barton and her husband Stephen Barton, Mishaela Albright, Kate Hull, and Christie Hull; his great-grandson Aiden Albright; and in-laws, nieces, and cousins. He was predeceased in 1938 by his beloved older brother Leo ("Bunny") Douville.
The family plans to host a celebration of Don's life in Marshfield this spring.
Published on February 14, 2020
To send flowers to the family of Donald Francis Douville, please visit Tribute Store.

Send flowers
in memory of Donald

JIM MICHAUD
The beautiful photo led me to read the obituary tribute to a man that I did not know, But upon the conclusion of the reading thereof, would have immensely enjoyed having known. My condolences are extended to you during this time surrounding the departure of an obviously very special man. May the same love that was so evident in that telling photo serve to support you at this time.
View all