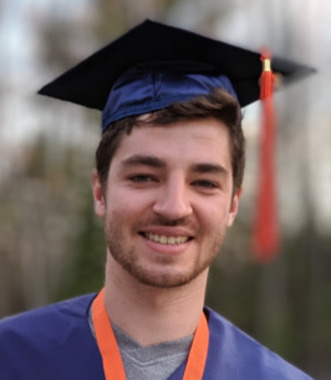 Hopkinton, NH. and Orono, ME. - Benjamin Joseph Thompson, 23, a resident of Hopkinton, NH and Orono, ME, died suddenly on Saturday, July 27. Born on May 2, 1996, he was the son of Eric and Carrie (Atwood) Thompson and the brother of Maggie and Sam.

Ben was most at ease with himself and the world when he was outside. He loved hiking and camping and biking and snowboarding. His deepest joys, from an early age to the present, came from spending a day with friends on the slopes or on the trails or in the water.

Ben loved and lived fiercely and totally, and his loyalty was legendary. His greatest desire was to make the world better than he found it, and he tried very hard to tread lightly on the earth he loved so much and to show the people in his life how deeply he loved them. He was a drop-everything friend to anyone lucky and blessed enough to call him that. Despite being outspoken and expressive of his love for others, Ben was exceedingly private about his inner struggles. He was so full of empathy for the world and its inhabitants that injustice and pain around him took a great personal toll. Ultimately, the world proved too much, such that Ben succumbed to his depression and anxiety, and took his own life.

Ben was predeceased by his paternal grandfather, Donald Thompson of Ambler; PA, his maternal step-grandfather, Mark Morehouse of Brewer, ME; and his maternal step-grandmother, Tangy Orange Atwood, of Port Bolivar, TX. They all thought Ben was all that and a slice of cake. They loved him deeply and recognized the passion, intelligence, and abandon with which Ben approached everything he did. His Grampy Mark, especially, inspired Ben to be a scientist and a thinker and a scholar.

Besides his family, he is survived by his maternal grandmother, Margaret Morehouse and grandfather, CG "Bud" Atwood, and his paternal grandmother, Claire Thompson; his uncles and aunts: Christopher and Cynthia Atwood, Timothy and Dawn Atwood, Tom and Tam Atwood, Tricia (Thompson) and Dave Robison, and Don and Sharon Thompson. He had cousins who loved him as deeply as he did them: Austin and Sami Robison, Beth (Thompson) and Mike Botkins, Ivy (Thompson) and Marcos Langhans, Christopher Thompson, and Caitlin, Jolie, Aimee and Camden Atwood.

Ben was also fortunate to have an extended family of great aunts and uncles and cousins, both by blood and by friendship, and others who loved him and thought he mattered. He was blessed with a vast group of virtual aunts too numerous to list but who have known him since before he was born. His adopted aunt, Laura Schick Zapanta, and his godmother, Elaine Tomko-Deluca, loved and cherished him beyond measure.
Ben will be deeply missed by his childhood friend and partner in adventure Sam Smith (as well as his parents Brenda and Jeff Litchfield and Brian Smith)) and his good friends Keenan, Collin, and Gabe as well as his University of Maine family and his farm friends, especially Kristie.

Ben made his family and friends laugh often with his keen sense of the absurd and his whip-smart sense of humor. He also made us better arguers and thinkers because he was unafraid to challenge our assumptions, our beliefs, and our supporting evidence with equal abandon. We loved him for it because we recognized his heartfelt commitment to fighting for justice and equality for everyone regardless of race, color, orientation, gender, religion, or any other distinction because he believed in the power of recognizing the humanity and innate goodness of every individual he met.

Relatives and friends are welcome to call 1-3 p.m., Friday, August 2, 2019, at Brookings-Smith, 133 Center Street, Bangor. In lieu of flowers, please make a donation in his memory to the Maine Chapter of The Sierra Club, 565 Congress St Suite 206B, Portland, ME 04101 (www.sierraclub.org), or NAMI: National Alliance of Mental Illness, 52 Water Street, Hallowell, ME 04347 (https://www.namimaine.org.) Be kind to the earth and its inhabitants, and please look out for each other.
Published on July 29, 2019
To plant a tree in memory of Benjamin Joseph Thompson, please visit Tribute Store.

A place to share condolences and memories.
The guestbook expires on November 15, 2019.